If iron tablets are not providing the results you need, your doctor can recommend iron infusion therapy as a fast, safe and effective alternative of delivering iron through a vein. Intravenous (IV) Iron Infusion can now be done in our clinic in South  Brisbane through Ferinject.

Why Iron Is Important

Iron is a mineral that is essential to human health; it is particularly important in allowing the transport of oxygen in blood. As well as playing an important role in many other vital processes in the human body.

Iron infusions are a popular procedure often undertaken by those with anaemia or are otherwise iron deficient. Symptoms of iron deficiency can include: feeling tired, dizziness, difficulty thinking, recurrent infections, paleness and breathlessness.

Having An Iron Infusion

In Australia, it is generally recommended to take iron orally as first-line treatment for most patients with iron deficiency. However oral iron therapy and dietary intervention may be of limited benefit to some people, including those with impaired intestinal iron absorption.

In these cases, your GP or specialist can recommend iron infusion therapy as a fast, safe and effective alternative of delivering iron through a vein. It delivers up to 1000mg of iron and quickly restores iron levels to normal.

Most patients experience a noticeable improvement in their symptoms after receiving an iron infusion. At Carina Medical and Specialist Centre, we have treated many patients with an intravenous iron infusion with very positive feedback.

Speak To A Doctor

If you feel tired, it is important to first consult with your doctor. Fatigue has many causes and your doctor will thoroughly investigate the causes before recommending any treatment.  If you suspect you may be iron deficient or would like to know more about iron infusions in our medical clinic, please book online or call 07 3398 8188 for an appointment.

An iron infusion is a minor procedure. It involves infusing an iron containing medicine directly into the blood circulation. The iron-containing preparation circulates and is delivered to the body organs that require iron for normal functioning. Ferric carboxymaltose (FCM) also known as FERINJECT®, is an intravenous (IV) iron preparation. It is used in the treatment of iron deficiency conditions such as iron-deficiency anaemia (IDA). It contains iron in the form of ferric carboxymaltose, an iron carbohydrate compound.

It may take around six to twelve weeks for the effects of an iron infusion to work in your body. It is usually a gradual improvement, with steadily increasing levels of energy, improved sleep quality and better mood and memory. For some people, the improvements will be very noticeable, while for others it will be subtle. The effect of iron infusions vary from person to person. If you have any questions about the way your iron infusion is making you feel, speak with your GP.

Iron infusions are considered safe. Particularly with the newer iron containing preparations currently available. In the past (older) iron infusions were associated with common side-effects including allergic type reactions. This is much less common with the current iron containing preparation (Ferric carboxymaltose FCM also known as FERINJECT®) but this is still a potential risk. Your doctor will talk to you about the risks and the benefits of having an iron infusion in your particular circumstances.

An iron infusion is not usually considered to be a painful procedure. You may feel some mild effects of the infusion for 1-2 days following the procedure. If you begin to experience any chest pain, difficulty breathing or dizziness, it’s important to immediately seek medical attention and raise the issue with your GP when next available.

It is always important to monitor your own health after an iron infusion. If you experience any significant symptoms (for example chest pain or difficulty breathing) contact your doctor who administered the iron infusion or an emergency department.

Some people will feel a little tired after an iron infusion, this should pass within a few days. If you are feeling unusual tiredness in the weeks following your iron infusion, follow-up with your doctor. 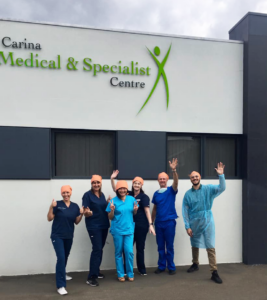